I’m sorry for not posting sooner but I caught a case of food poisoning  by way of mushrooms.  Don’t ask! By the time I recovered, I had so much stuff to do in and out of the house and couldn’t find the time to post…until now.  One sure fire way to tell that I’m feeling better is that I get real hunger pangs.  You know, most of us eat because it’s time to have a meal but that real gnawing hunger is something we seldom experience.  Obviously after a food poisoning episode, the smell of regular food can take a toll on your constitution and your supposed to follow the BRATT diet to regain your strength and calm the tummy. Bread, Rice, Applesauce, Tea and Toast.  Start with bread and end with toast – what’s not to love if those are the choices?  That’s how I got the idea to make bagels – after getting bored of eating steamed rice.

I must confess, I have never tried to make bagels because let’s face it – there are so many stores dedicated to doing it so why would I bother? Well for one, I no longer live in places that have those kinds of stores.   I sure miss their endless bagel and spread variations!  I had a girlfriend who worked at Einstein Bros Bagels and lets just say, we got dozens of bagels from her all the time.  We don’t have a bagel culture in Nairobi and if you asked the average Kenyan what a bagel was they wouldn’t know…or care for that matter.  Breakfast for most Kenyans is tea and toast…if even that.  To my surprise, breakfast is not really big over here.  On the weekends though some people will splurge on English Breakfast or go for brunch where there’s real  cooked food.

So, imagine my surprise when I recently saw a frozen bagel package in my local supermarket!  I was giddy for all of 30 seconds.  That is until the Mr said,  “it’s frozen and probably been there for a while” and that killed my bagel high right there.   If you’ve had a fresh bagel, the frozen variety just doesn’t cut it but you can understand my excitement at seeing that package right?

That’s  when I really gave in and decided to try a bagel recipe.  I wanted to recapture that early morning feel of ordering hot piping coffee and a toasted “everything” bagel with herby cream cheese (my vegetarian days) or honey walnut cream cheese.  Ok, in a pinch I’ll take strawberry cream cheese too (the Mr’s fave).  But you get my drift.

Be warned, this is my first trial of making bagels so let’s just say that things could have been done with a lot more finesse!  It was fun though, especially when the Mr came into the kitchen right as I was boiling the dough…

Him: Bagels are boiled? I always wondered why they weren’t greasy!

Me:  So you er…*chuckling* you thought they were fried? Like say, donuts?

Him: *realizing how crazy he sounds* Yeah, or something…ok but not like donuts

Me: Ok, Sherlock…if they were fried they’d be like donuts

Him: Ok, whatever babe, just wake me up when they are ready and I’ll let you know if they taste right (had to have the last word) 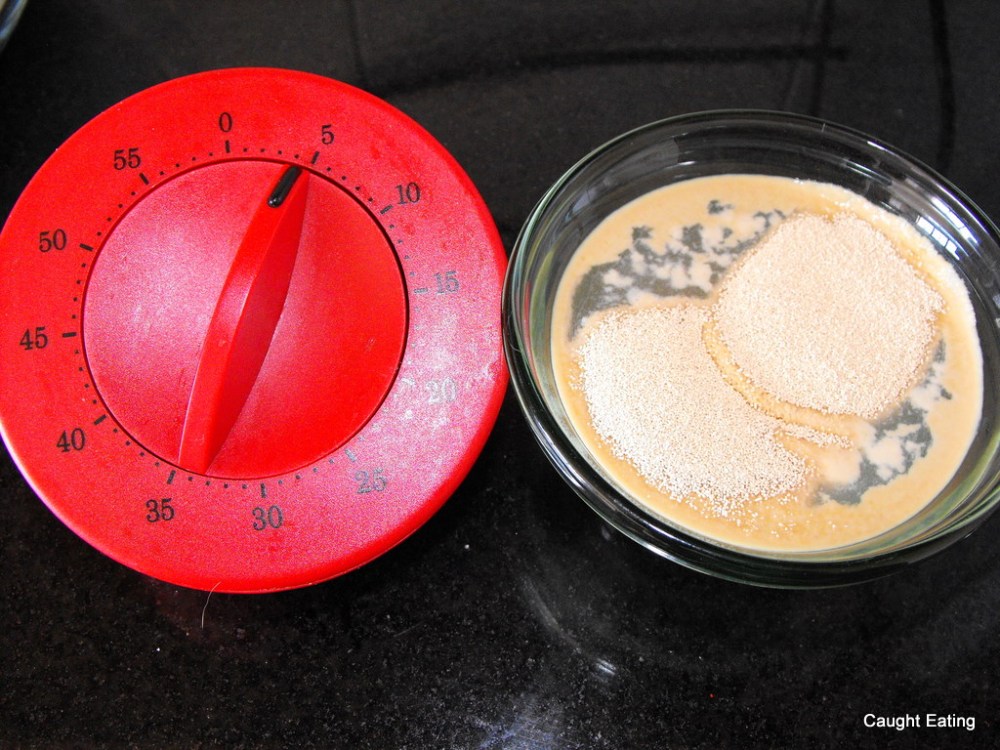 First, get your yeast started by adding it to warm water and sugar.  Yeast feeds on the sugar so it should start frothing in about 5 minutes 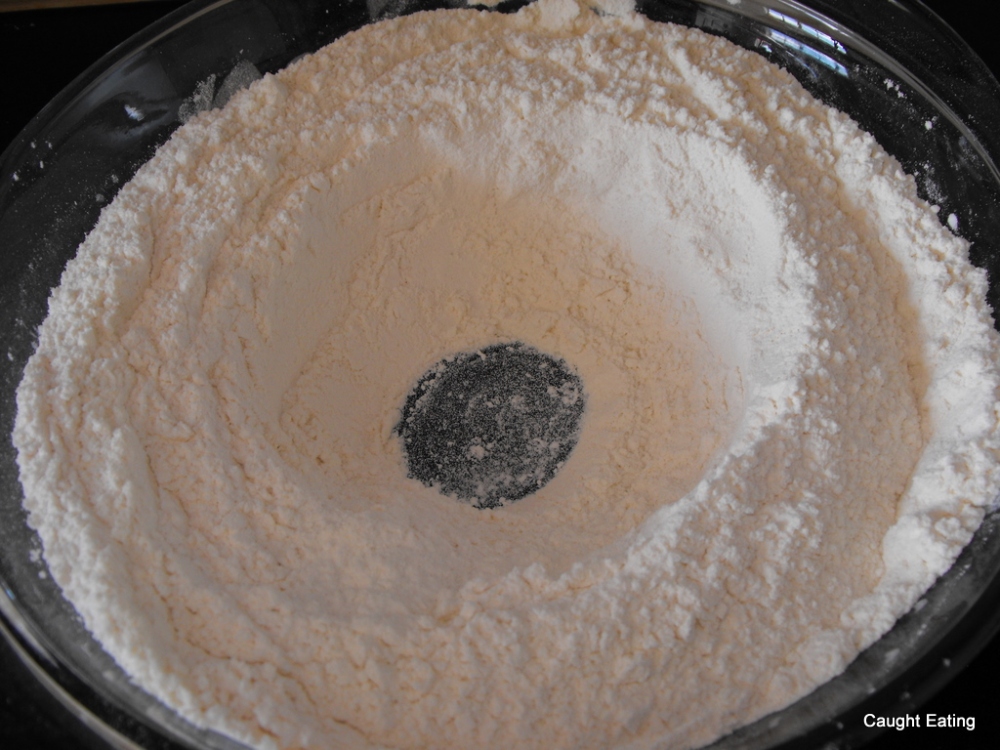 Whisk your flour and salt in a bowl and make a well in the middle.

This is how your dough will look like after it has absorbed all the liquid.  Turn it out onto a well floured surface and knead until soft and elastic

Lightly oil a bowl and rest your dough, covered, for about an hour 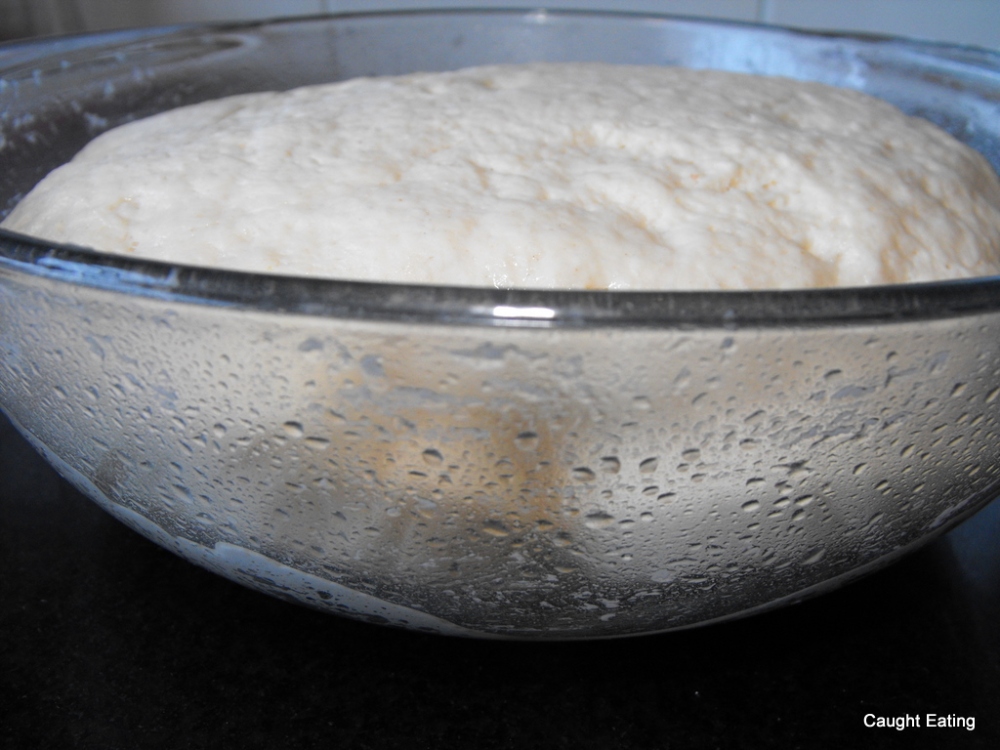 Due to the heat in my kitchen, my dough was ready in under an hour…see all the condensation bubbles and how dough has doubled in size?  Yours may take more or less time depending on the temperature of your kitchen. 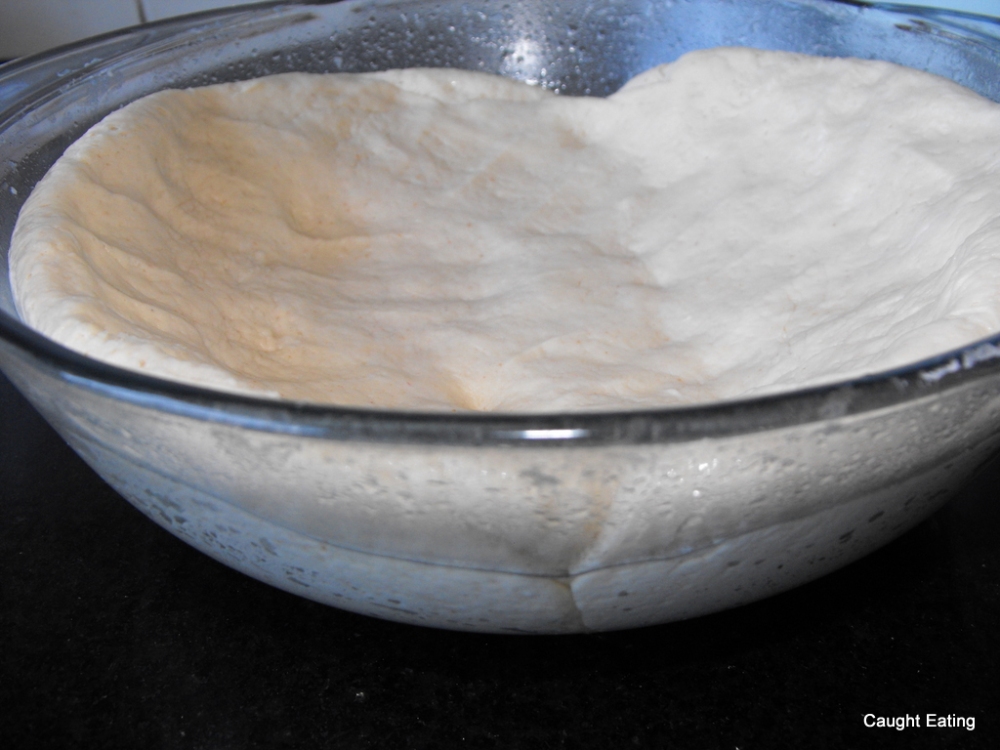 Punch it down to get rid of the air bubbles trapped in the dough.  Let it rest for another 10 minutes 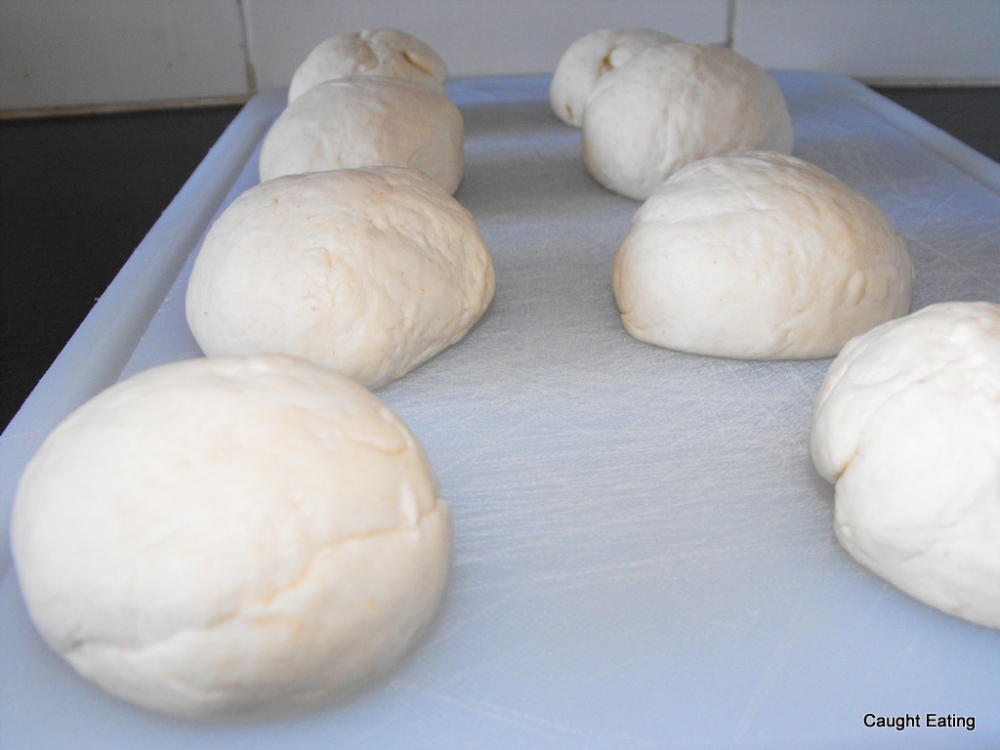 Divide your dough into 8 balls (you could have more or less depending on the size of bagels you want). Shape each piece into a round, then dip your thumb into some flour and push through the middle of the dough to form a hole

On a couple of the dough rounds, I tried a different style of bagel shaping where you roll out the piece of the dough into a one-inch thick cylinder, form into a ring and pinch the two ends together…these didn’t work out too well for me but  word has it that’s how all the pros do it.

Put the bagel rounds on a cookie sheet, cover with a kitchen towel for about 10 minutes.  Meanwhile, bring water to a boil in a large pot and preheat your oven to 425F(218C)

Also, get your toppings ready if using.  I decided to use sesame and poppy seeds

Do not overfill the pot – I used a big pot and was able to boil 4 at a time.  This is around the time the Mr came into the kitchen and I ended up boiling these for about 4 minutes (instead of a minute on each side) and not what the recipe said… 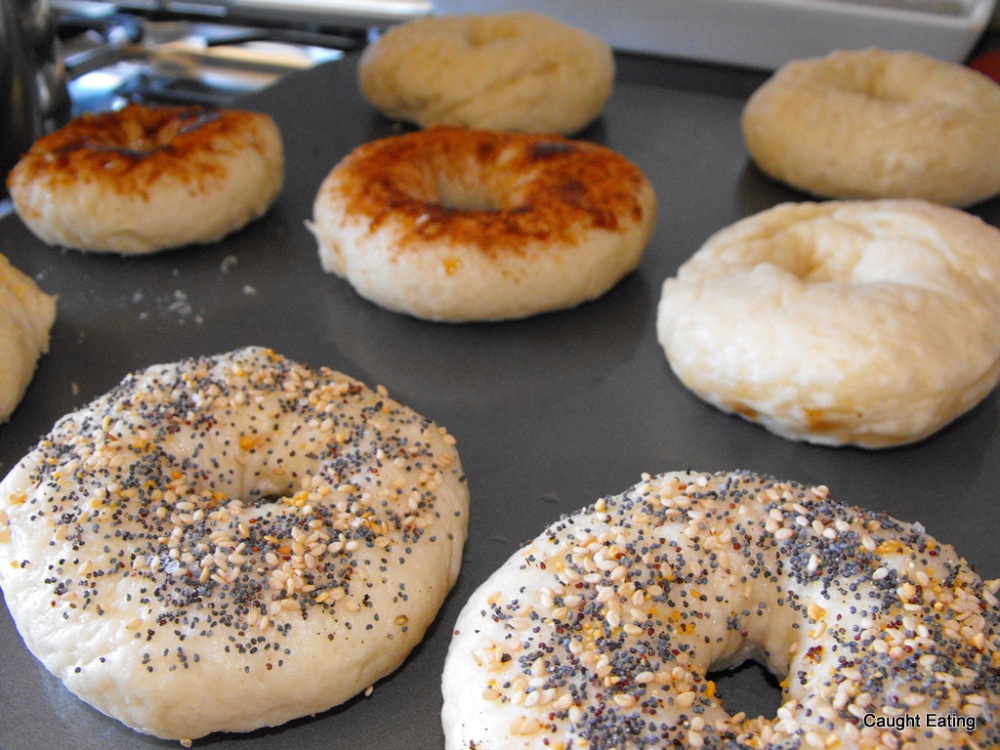 As soon as they come out of the water, have your toppings ready.  For my “everything bagel” I also had garlic and salt on hand, but sadly no onion.  I sprinkled cinnamon sugar on some and then left the rest plain.  There’s a debate on whether to [egg] wash a bagel prior to topping so you can do that if you want to…I didn’t obviously!  A good vegan egg wash is a sugar syrup or maple syrup + soy milk. Pop into oven for 20 minutes or until golden brown. You can flip them and bake the underside for another 10 minutes.

Here’s the “everything” and the cinnamon sugar at the forefront.  The plain were just plain ugly so I stuck them in the back.  They didn’t brown as much as I wanted them to so maybe there’s something to the [egg] wash. Next time I’ll try adding molasses to my water, that should solve the issue. 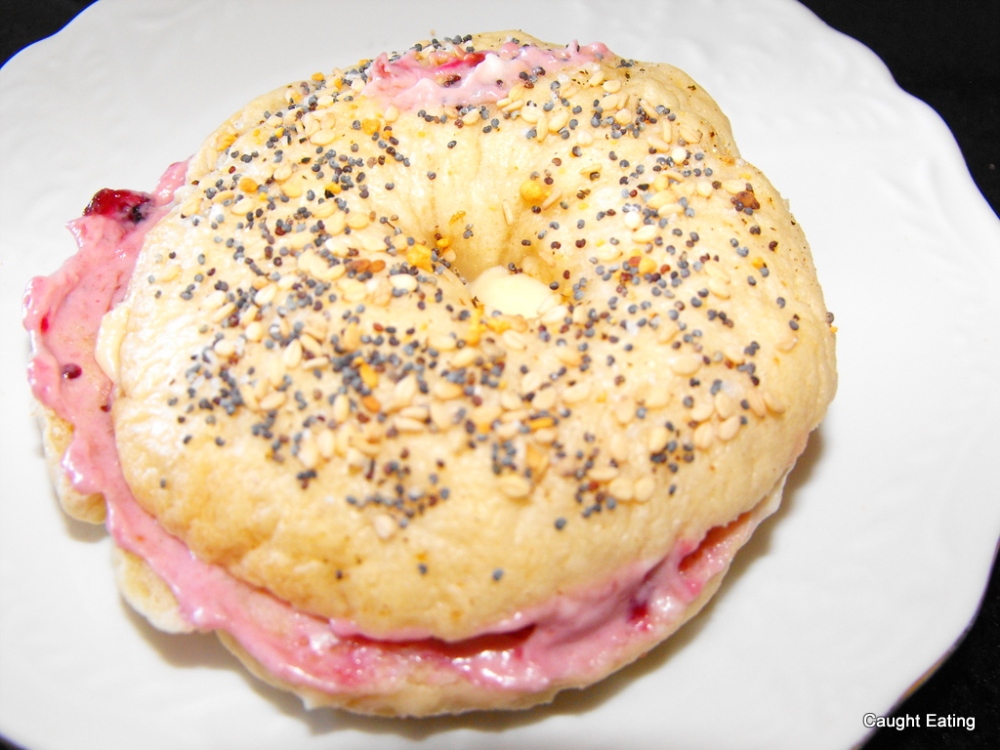 Slice them bagels up and spread your cream cheese on them.  I had strawberry on the bottom and honey-almond on the top.  Not bad at all…but there was definitely a textural difference from the bagels I used to eat.  It was fun making these and not nearly as much work as I thought so I’m definitely going to try them again!

A couple of notes:

Servings: 6-8 depending on size you want

I live to eat

The Authority on All Things Cruelty-Free and Fabulous

A travel blog about my adventures (mostly) camping in Kenya.

A Wayfaring Wanderer's Nomadic Journey Around The World

Omenana is a tri-monthly magazine that is open to submission from speculative fiction writers from across Africa and the African Diaspora.

Vegan & Vegetarian recipes from around the world

Everything Is a Story

live your best self with real foods

The latest news on WordPress.com and the WordPress community.